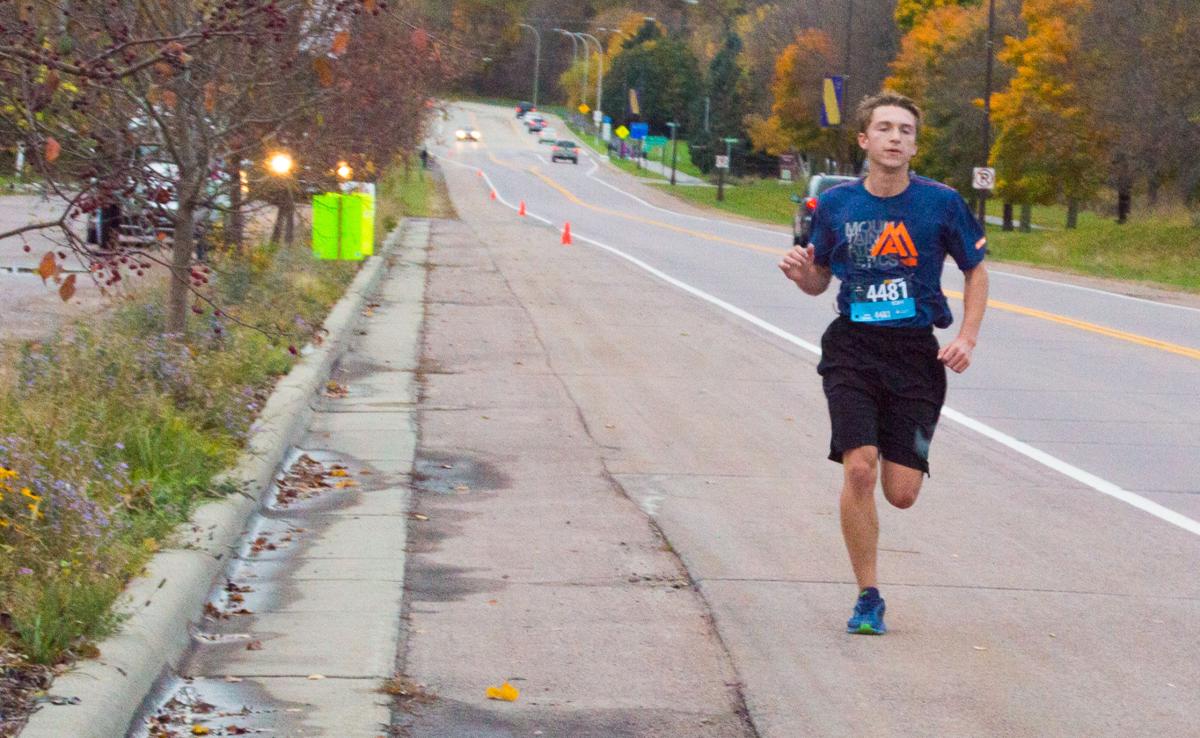 Winner of the 10k race, Riley Bauer, 17, run's toward the five-mile mark with ample space between himself and the next runner Sunday. Bauer finished the race in 33:20. Photo by Casey Ek

Women's 10k winner, Annie Magnusson of Mankato, approaches the five-mile mark of the 6.2 mile race. She finished in 38:19. Photo by Casey Ek

The earliest risers on Sunday morning weren't the Mankato Marathon and half-marathon runners. The first ones out on the roads ran the event's 10K.

It wasn't necessarily bright, but it was early — definitely early.

The race began right around 7:30 a.m. as scheduled, and the first runner hit the finish line at 8:04 a.m. That was 17-year-old Riley Bauer of Bancroft, Iowa.

Bauer finished with a time of 33:20, which breaks down to a 5:23-per-mile pace. Bauer placed first among 860 other runners. While most of the field didn’t set out to blow away the pack, some, like Bauer, were motivated to finish at the top and with a good time.

“I came down here because I have a state meet next Saturday so I was just trying to get into the atmosphere of running hard and finishing strong.” Bauer said.

Strategy is important for every race, and each individual has his or her own plan. Bauer's strategy was simple: start slow, finish strong.

“I start off a little bit slower to get the feel of the race — if it’s nice and cold, downhill or hilly," he said. "It was pretty much downhill so I started to pick up the pace every mile and tried to finish strong. I ran, I think a minute and 30 seconds faster than a couple years ago so I’m pretty happy with this.”

Not far behind Bauer was the first female to cross the finish line, Annie Magnusson, who had a time of 38:19, good enough for third overall.

It was the first-ever 10K for Magnusson, a 20-year-old Minnesota State University student from Fergus Falls. Though she didn’t have a state meet to prepare for like Bauer, Magnusson was still motivated to finish at the top, even though it was a last-minute decision made to enter.

“Me and my friend were just like, 'Let's just run it.'” Magnusson said. “It wasn’t easy. At the end, I was kind of dying, but it was good, good pace.”

Staying on pace and keeping that pace is what runners like Magnusson and Bauer look to do once they’ve found their groove. Sometimes, like in Magnusson’s case, having someone to stay on pace with also makes a huge difference.

“I wanted to stay with the front pack," she said. "That was kind of my strategy. And I had my time so I was keeping with my pace, so it was good. I was trying to stay on pace with the guy in front of me (Bryan Dixon). Sometimes he would go really fast, but he was a good pace runner.”

Dixon, from Otsego, Minnesota, finished second overall with a final time of 38:07.

Mankato’s hilly terrain posed a lot of questions for runners at the start of the race, but those were quickly answered.

“It was good.” Magnusson said. “That’s what I was a little scared about because there are some big hills here. ... But a lot of it was downhill or flat for what they could have made it."