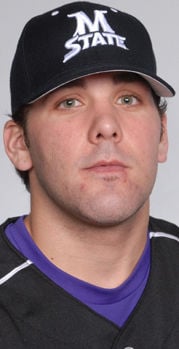 Former Minnesota State standout Dane Allen belted two home runs and had seven RBIs while former Maverick Zach Danelson fired a two-hitter as the Mankato Twins won their season home-opening amateur baseball game 11-1 Sunday over Albert Lea. The seven-inning Southern Minny League game was played at Franklin Rogers Park. Allen ended up 3 for 4 with a three-run homer, a two-run homer and a two-run single. Travis Helling was 2 for 3 with two doubles and two RBIs. Jay Nessler also drove in a run, going 2 for 4 with a double. Ryan Greene also had two hits. Danelson went six innings for the victory, striking out four, walking two and giving up one run. “He looked very good tonight,” player/manager Nessler said. “He had a no-hitter going into the fourth inning.” The Twins did receive a no-hitter from starter Kevin Dixon in their season-opener Saturday, but came out on the losing end of a 2-0 score against Miesville. Mankato (1-1) plays again at 7:30 p.m. Wednesday against the Eastside Merchants at Wolverton Field.