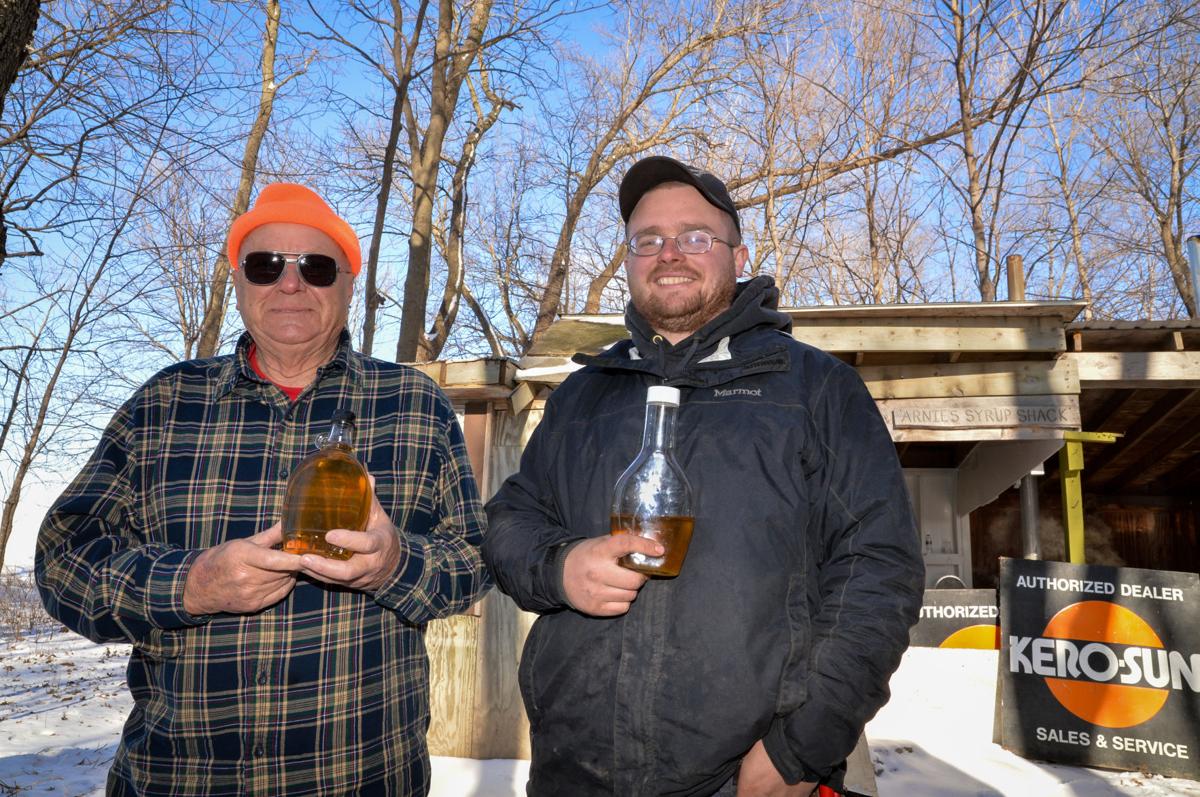 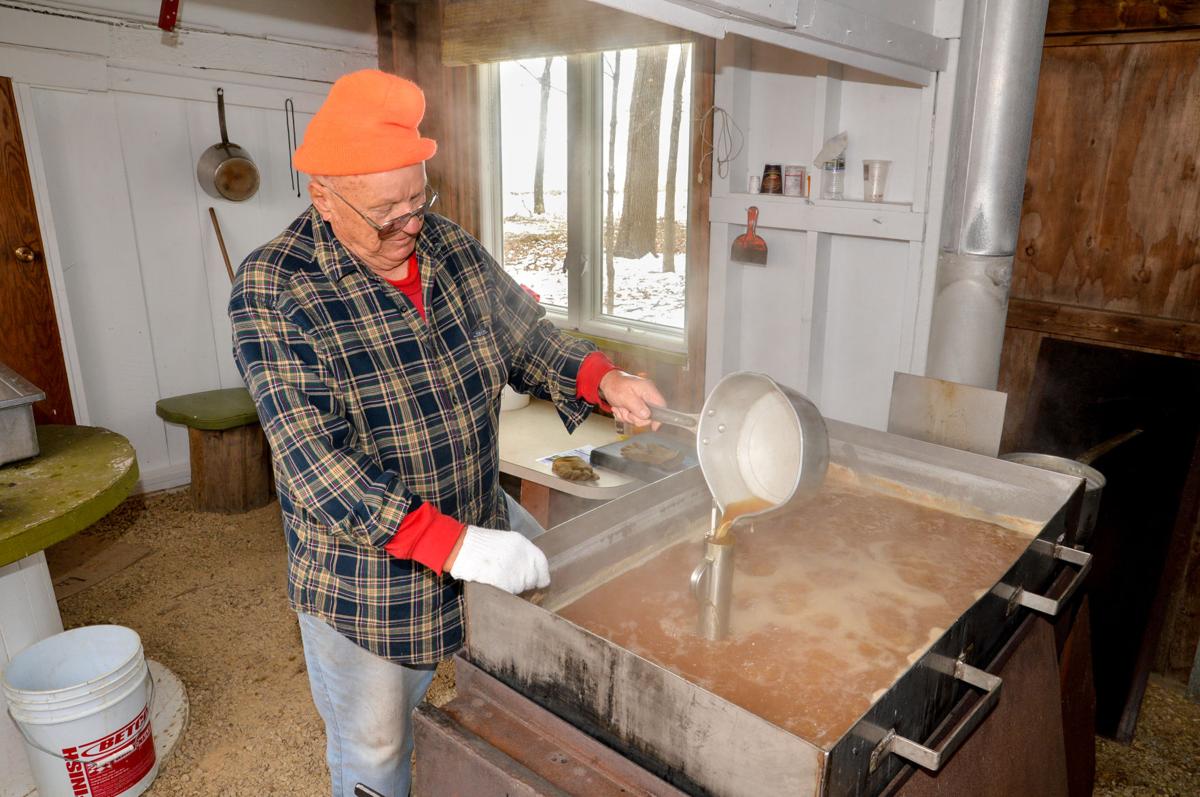 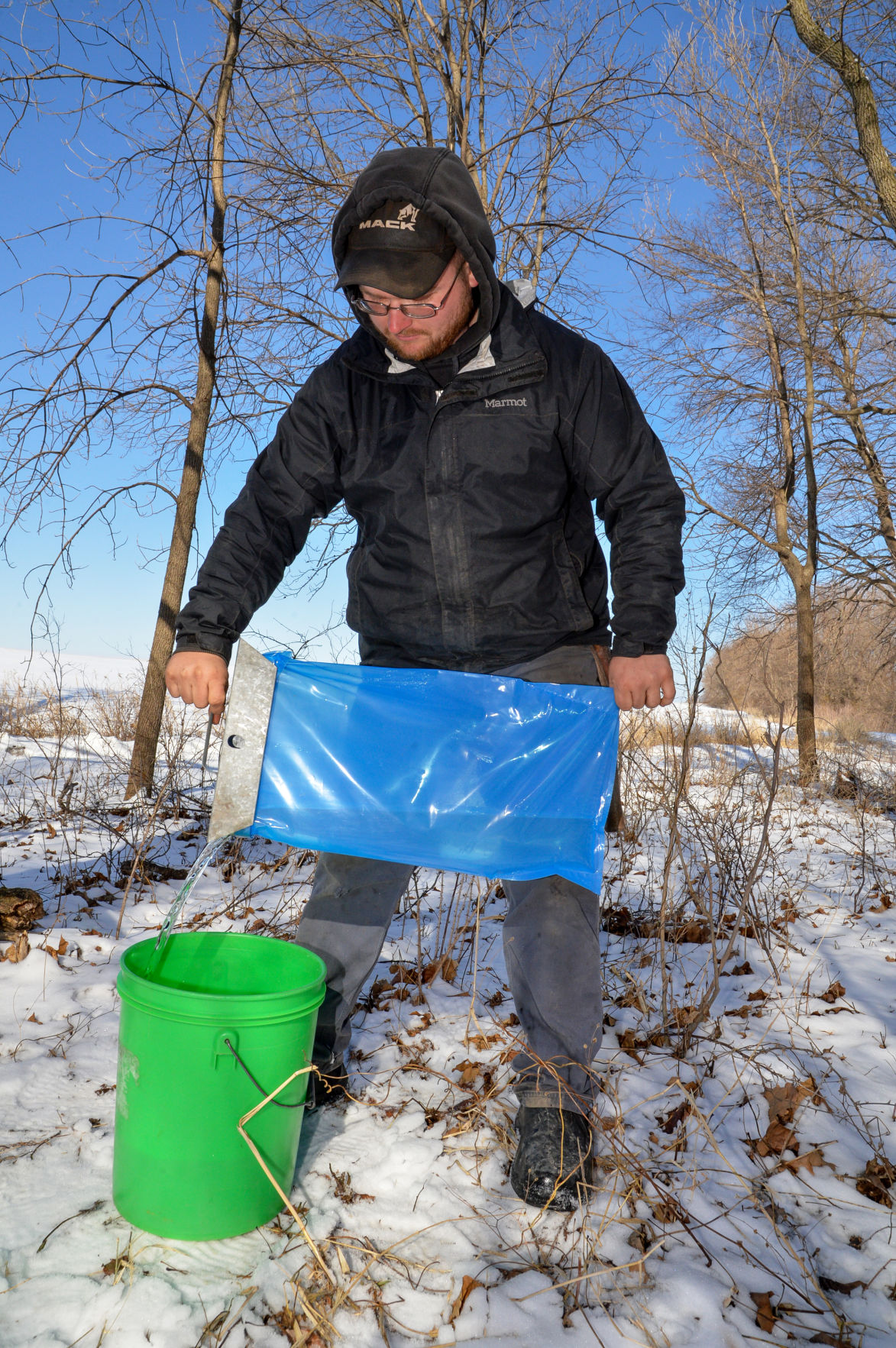 Jake Koberoski transfers maple sap from a collecting bag into a pail before toting it to the cook shack. Photo by Mark Morrison 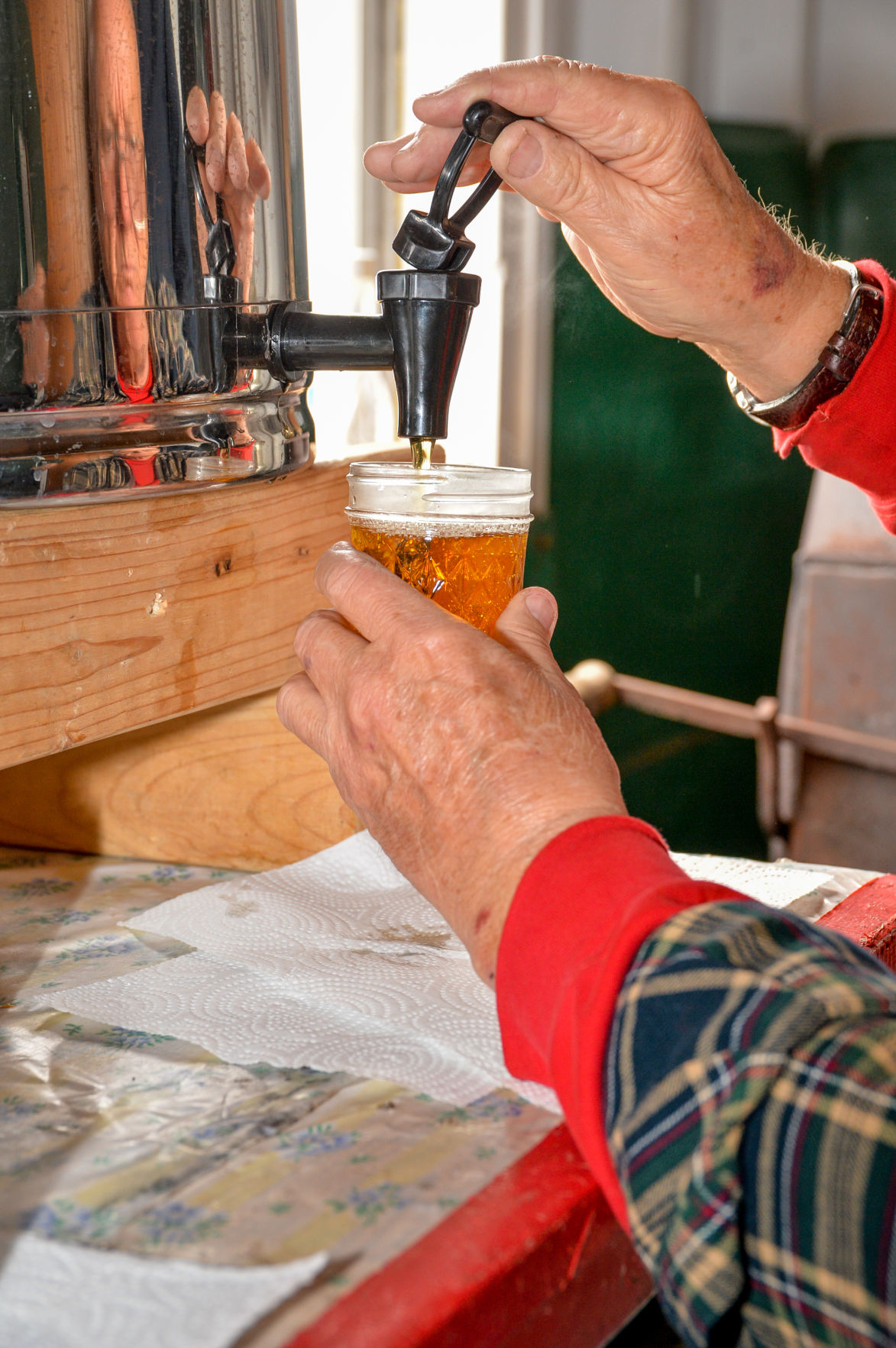 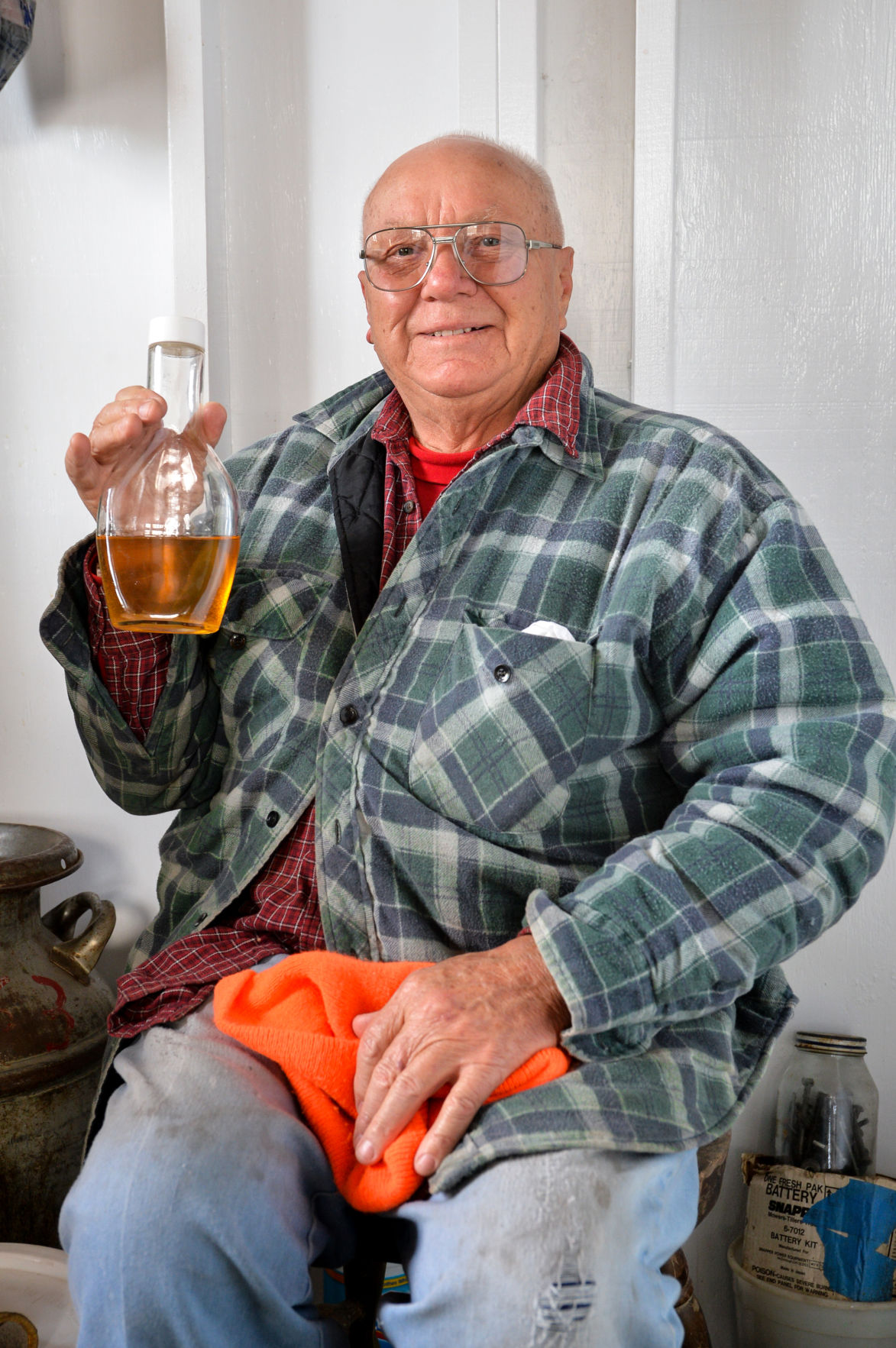 Jake Koberoski transfers maple sap from a collecting bag into a pail before toting it to the cook shack. Photo by Mark Morrison

I have to confess, I love to arise early and breakfast on whole-grain waffles. I prefer my waffles to be heated until they’re past overdone and dark and crispy. Once they’re ready, I refuse to douse them with store-bought syrup. Nope, I want the genuine thing — home-crafted maple syrup tapped from trees in the Kato area.

The shack sits in a copse of maple and hickory trees and is representative of Arnie’s time-honored method of turning maple sap into perfect, mouth-watering syrup. The entire thing was built from recycled lumber, and except for the canning room, is a three-sided roofed affair open to the air on its south side. It houses three large, ingeniously designed and crafted, steel, wood-fired cooking stoves which sit below jumbo rectangular stainless steel cooking tubs.

To keep with tradition, there is no electricity at the sugar shack. I wasn’t there when Arnie lit the stoves, but I wouldn’t be surprised if he used a spark off a flint stone to do so.

The filling, or canning room, sits at the shacks west end. This room is used for sterilizing jar lids and filling syrup jars. It is completely enclosed and features two windows and a single Coleman lantern for light. It fits seamlessly with Arnie’s pragmatic style — it was constructed from throw-away materials hauled down from a huge deck tear-down in the Twin Cities.

The science of syrup production is found in the experience at the shack. Arnie’s been at this maple syrup thing his entire life. What’s more, he’s a fourth-generation maple syrup maker. His great grandfather, who served in the Civil War, started tapping maple trees on his newly homesteaded property in Rice County after he exited the military at war’s end in 1865. His family has been at it ever since, something Arnie is strongly proud of.

Next to the sugar shack sits his wood shed, conveniently situated so that wood is easily moved to the stoves. It houses numerous types of split Minnesota woods, from red elm, hickory and ash to cottonwood. Arnie had Jake moving some wood from one side of the shed to another and said with a sly grin, “Later, I may have him move it all back, just like they do in the Army.” Arnie can be a sarcastic fellow.

Arnie’s knowledge of wood species and their burning properties is evident when stoking the cook stoves, especially when the syrup is nearly cooked. His experience tells him just what kind and what size of wood to feed the fire to attain a certain cooking temperature and length of burn without scorching the sap. It’s uncannily accurate and wouldn’t be more precise if he was turning a dial on a gas stove.

To arrive at a final product, Arnie and Jake run taps on numerous trees at several properties. The sap is collected in either buckets or more often inside clear translucent bags attached to the taps. On larger tracts, Jake runs an ATV, filling containers from the sap bags and then returns to his truck where he transfers the sap into a large plastic tank. He repeats the process until all the bags are empty and then heads to the sugar shack to begin the cooking the sap.

Maple sap emerges from trees as a gin-clear, sugar- and water-laden liquid. Once it’s properly cooked, it turns to its familiar amber-gold color. Depending on the volume of sap and outside air temperature, cooking can take anywhere from 6 to 48 hours. The cooking dissipates most of the water from the sap to leave a perfectly sugary maple liquid mix behind. It takes about 30 gallons of sap to make 1 gallon of maple syrup.

When Arnie feels cooking is nearly over, he uses a hydrometer (which seems to be his only modern concession) to measure the syrup’s sugar density. When it hits a specific mark, Arnie deems the syrup fully cooked and moves onto the filtering process.

The syrup is scooped from the huge stainless steel cooking pan via a jumbo aluminum pan and poured through cloth filters into a 10-gallon milk can. The filters catch any solid impurities, and the resulting liquid is golden-clear and clean.

After filtering, Arnie and Jake pour the contents of the milk can into what looks like a huge chrome coffee urn complete with a toggled tap. Next, befitting Arnie’s syruping roots, they set out varying sizes of mason jars, fill them with the smooth, sugary confection and finally, cap them with sterilized lids.

After the last jar was filled and capped, Arnie grabbed a few Dixie cups, filled each one half way with the fresh, warm syrup and we toasted the day and the sugar shack’s storied traditions.

It may go without saying, but I left the shack with a load of syrup and a renewed appetite for seared waffles drizzled with fresh maple syrup.

Mark Morrison is an avid hunter and fisherman who has been a freelance outdoors writer and photographer for 21 years. The Mankato resident since 1979 may be contacted at mercuryphotog@aol.com.