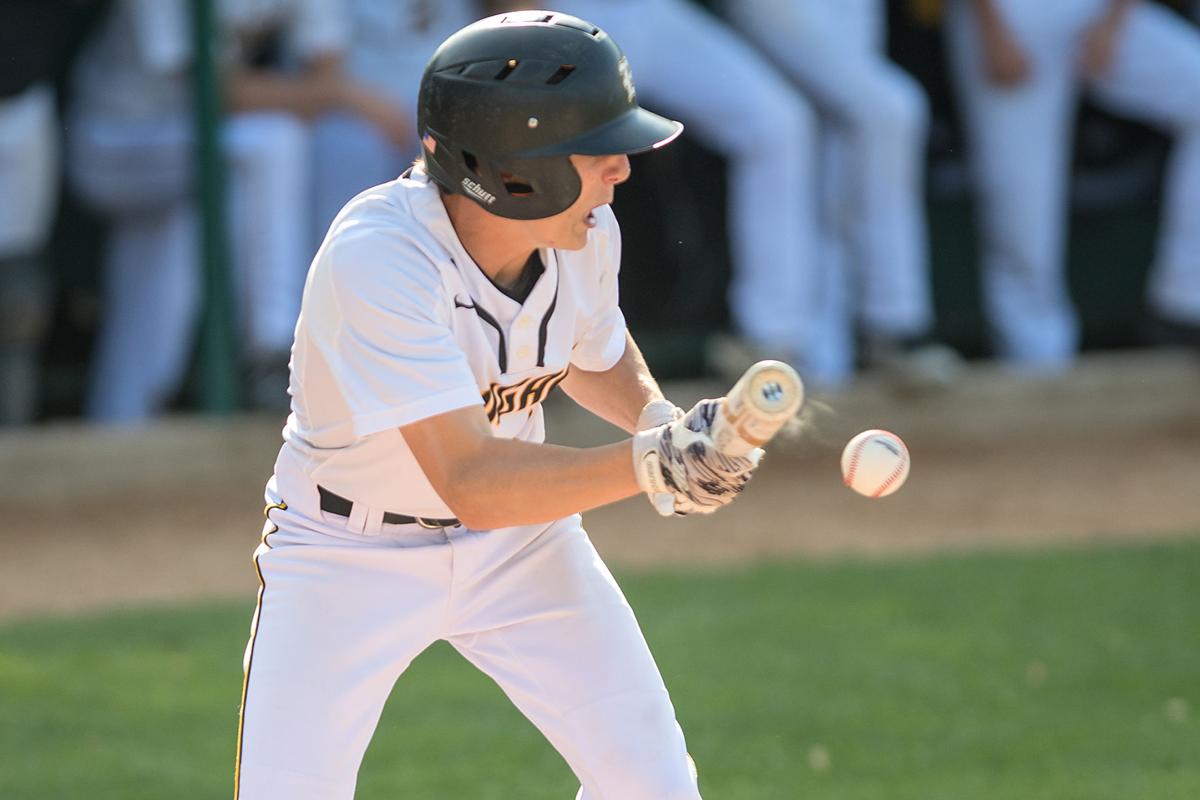 Mankato East's Grant Hermer lays down a bunt in a Section 2AAA playoff game against Hutchinson played in New Ulm on Saturday. Photo by Jackson Forderer 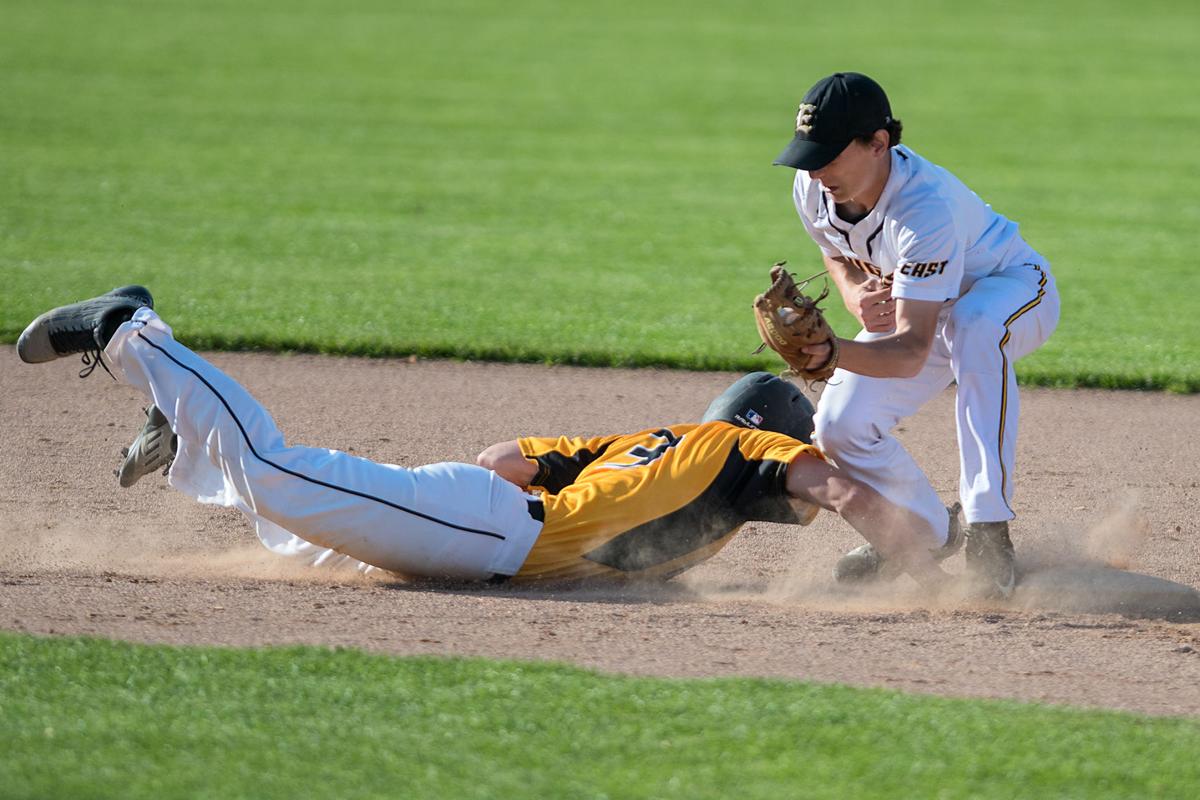 Mankato East's Jack Clifford is tagged out at second base by Hutchinson's Lane Glaser during a steal attempt in Saturday's Section 2AAA playoff game. East lost 2-1. Photo by Jackson Forderer

Mankato East's Grant Hermer lays down a bunt in a Section 2AAA playoff game against Hutchinson played in New Ulm on Saturday. Photo by Jackson Forderer

“Everything their guy did, Jaeden did, and everything Jaeden did their guy did,” Cougars baseball coach Micah Degner said. “And the defense behind both of them was incredible. They made some great plays.”

The starters in the Section 2AAA tournament winners bracket final allowed a combined five hits with only two of the hits reaching the outfield grass at Johnson Park.

Things changed when the two teams went to their bullpens, and Hutchinson won 2-1 in eight innings and sent top-seeded East to the elimination bracket.

The Cougars (17-4) will play Marshall on Tuesday in hopes of getting a rematch against the second-seeded Tigers. If they get there they’ll have to beat Hutchinson twice to get to the state tournament.

“I think we’re going to come out and hit the ball much better than we did today,” Kenward said. “Today was an off day for us. We’ll come back strong Tuesday and hopefully double them up on Thursday.”

Each team finished the game with four hits.

Kenward, a junior left-hander, went 7-plus innings, leaving the game after walking the leadoff batter in the top of the eighth. He allowed two hits, struck out three and walked five on 109 pitches.

The Tigers took a 2-1 lead when that batter, Zach Kuseske, scored on a wild pitch by East reliever Jake Prybylla. After drawing the walk, Kuseske advanced to second on an overthrown pickoff attempt by catcher Isaac Turner and went to third on a bunt single by John Jennings.

“We executed that so well all year,” Degner said, “I called for the pitch-out and pick-off. If I did it again 100 times in a row, Isaac is going to get it there 100 times. I trust him every time, and I trust our guys to make pitches.”

Van De Steeg, a senior right-hander, allowed three hits with three strikeouts and two walks before he was lifted after seven innings. At one time he retired 13 batters in a row, getting help with some nifty defensive plays by Jennings at third base and Tyler Schiller in center field, before a Jack Clifford single in the sixth.

The Cougars made things difficult for reliever Russell Corrigan in the eighth. With two outs, Clifford walked, Prybylla hit a rocket off the third baseman’s glove and Travis Noren was hit by a pitch before Ryan Kuechle popped out to end the game.

The Cougars cracked the scoreboard first as Prybylla, who finished 2 for 3, came home on a bases-loaded fielder’s choice by Turner in the second inning.

The Tigers tied the game on an RBI single by Billy Marquardt in the top of the third.

While the Cougars are hopeful to get a rematch with Hutchinson (18-3), they’ll have to get by Marshall first. The elimination game will take place at 6 p.m. Tuesday at New Ulm.

“It’s a tougher road,” Degner said. “We’ve got to try to beat Marshall for a third time. It’s tough to beat any team three times, so we’re definitely not overlooking them.

“But tonight was as much fun a baseball game as you could possibly have, so we’re looking forward to doing it again twice on Thursday.”

The Scarlets finished the season 14-10.

In the first game, West scored two runs in the top of the seventh inning to break a 5-5 tie.

Avery Miller got the win, allowing five runs on four hits with three strikeouts and a walk. Lucas Warner got the save.

In their second game, the Scarlets were held to three hits by Marshall pitcher Isaac Schmitt.