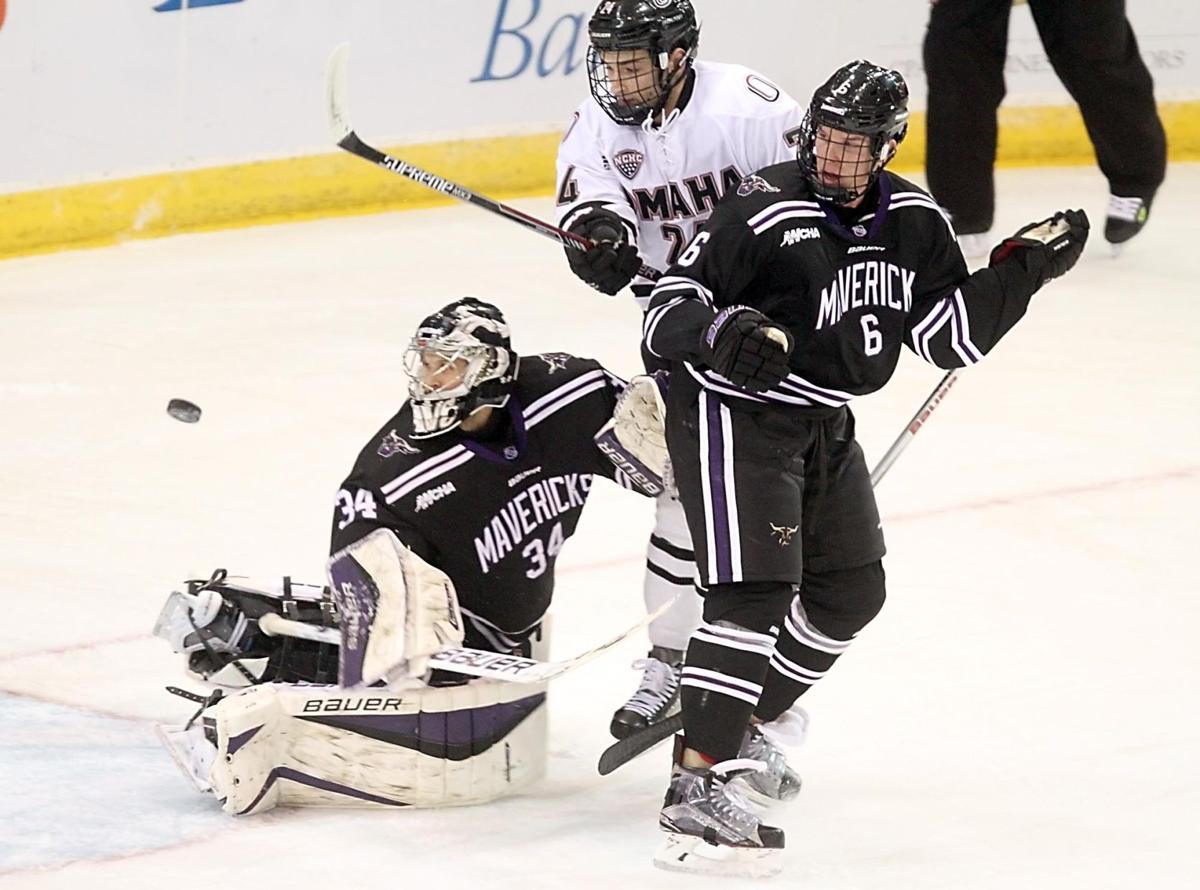 Minnesota State's Cole Huggins (34) and Casey Nelson (6) and University of Nebraska-Omaha's Ian Brady (24) watch a puck deflect wide of the net during the first period Friday at the Verizon Wireless Center. Photo by Pat Christman 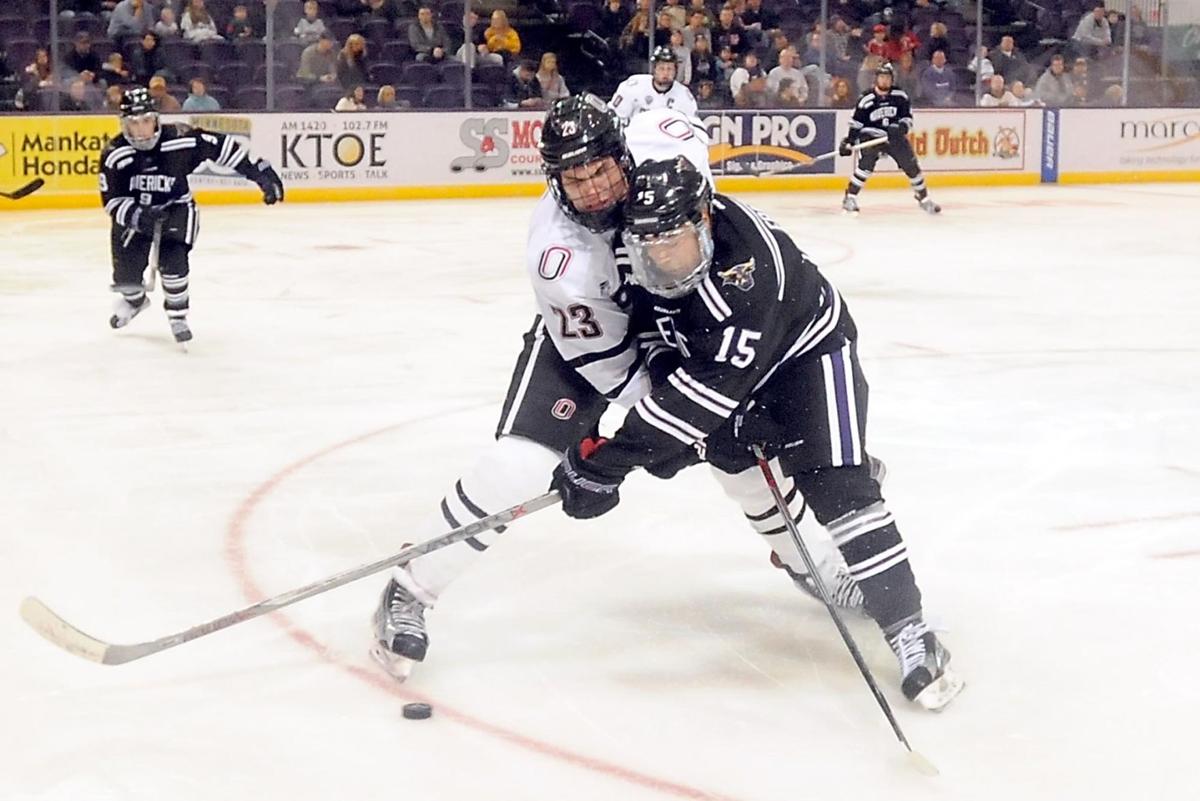 University of Nebraska-Omaha's Grant Gallo (23) and Minnesota State's C.J. Franklin (15) battle for the puck during the second period Friday at the Verizon Wireless Center. Photo by Pat Christman 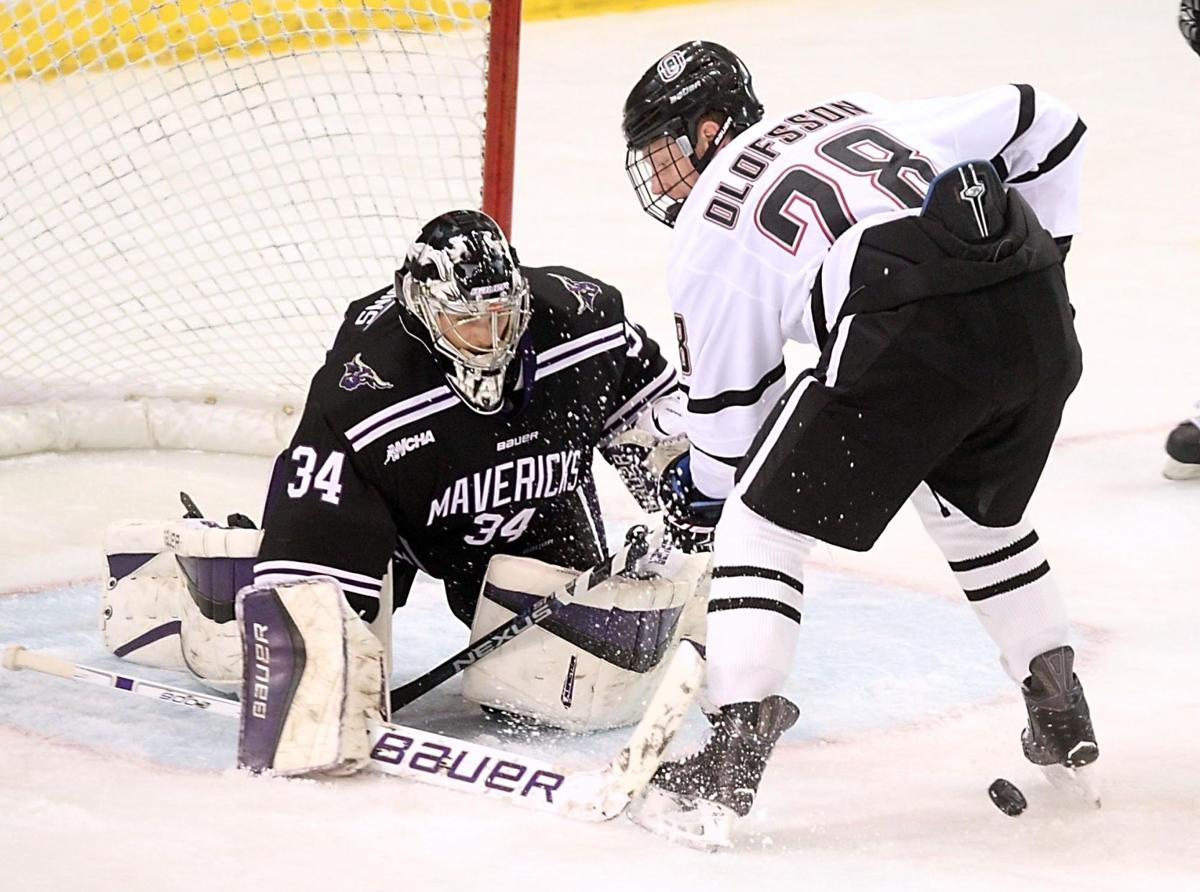 Minnesota State's Cole Huggins (34) and Casey Nelson (6) and University of Nebraska-Omaha's Ian Brady (24) watch a puck deflect wide of the net during the first period Friday at the Verizon Wireless Center. Photo by Pat Christman

University of Nebraska-Omaha's Grant Gallo (23) and Minnesota State's C.J. Franklin (15) battle for the puck during the second period Friday at the Verizon Wireless Center. Photo by Pat Christman

MANKATO — Mike Hastings warned his Minnesota State men’s hockey team about starting slow against a fast team like Omaha, and he wasn’t lying.

“It’s one (thing) to spot a team a goal, but we’ve got to quit spotting field goals,” Hastings said after Friday’s 3-2 season-opening loss, “especially to a team like that.”

On a night when the governor of Minnesota did the ceremonial puck drop and four banners were unfurled from the Verizon Wireless Center rafters, No. 6 MSU let the excitement wane, falling behind 3-0 to their 10th-ranked nonconference rival after a little more than a period. Despite a strong finish, they couldn’t complete the comeback for the boisterous crowd of 4,423.

“We got off to a slow start and that’s what hindered us,” said sophomore forward C.J. Franklin, who scored one of MSU’s two goals. “I wouldn’t say it was X’s and O’s; our intensity was off a bit. But I feel like we got it back up.”

Minnesota State outshot Omaha 26-25 and attempted 68 shots to its opponent’s 40.

Franklin hit a crossbar early, and Bryce Gervais drew iron on a short-handed breakaway in the third period. Teddy Blueger and Gervais had good chances with an extra attacker on the ice in the final minute. Omaha also blocked 23 shots for goalie Kirk Thompson.

How to turn those chances into goals?

“That’s the fairy dust I’d like to find to sprinkle on players because the effort was there,” Hastings said. “We just didn’t finish. Our effort over the second half of the game was where it needs to be, and we’ve got to find a way to get a split tomorrow.”

There were no whistles and a pretty torrid pace for the game’s first 4:34, and the first stoppage came on a goal by Omaha’s Jake Randolph, a tic-tac-toe play to the wide-open sophomore. Huggins never had a chance.

Omaha added to its lead with 1:38 left in the period as Jake Guentzel finished off a rush after a neutral-zone turnover by MSU.

The second period didn’t start out any better, as Omaha’s top goal-scorer from a year ago, Austin Ortega, made it 3-0 just 53 seconds in.

Minnesota State tightened up defensively, getting more physical, and momentum seemed to turn its way when Mullin finally scored on the power play with 6:32 left in the period.

Mullin, who was playing in his first college game in 22 months, grabbed a popped-up puck as he skated around the back of the net and with little time or space was able to get it down and shoot it into the net.

Frankin put MSU within one goal at 4:37 of the third period, tapping in the rebound of a Casey Nelson shot and taking advantage of Thompson playing without a stick.

“We played with a little bit of fire,” Hastings said. “I thought we played well over the second half of the game and had the right guys with the puck on their stick late. … But you have to give Omaha credit. They found a way to survive and win a hockey game.”

Before the game, Gov. Mark Dayton dropped the puck and was hailed for his support of the bonding money that paid for the upgrades to the civic center. Also, MSU dropped banners honoring last season’s WCHA regular-season and tournament championships, their 14 NCAA tournament appearances and the 1980 Division II national championship team.

The series will conclude at 7:07 p.m. Saturday.