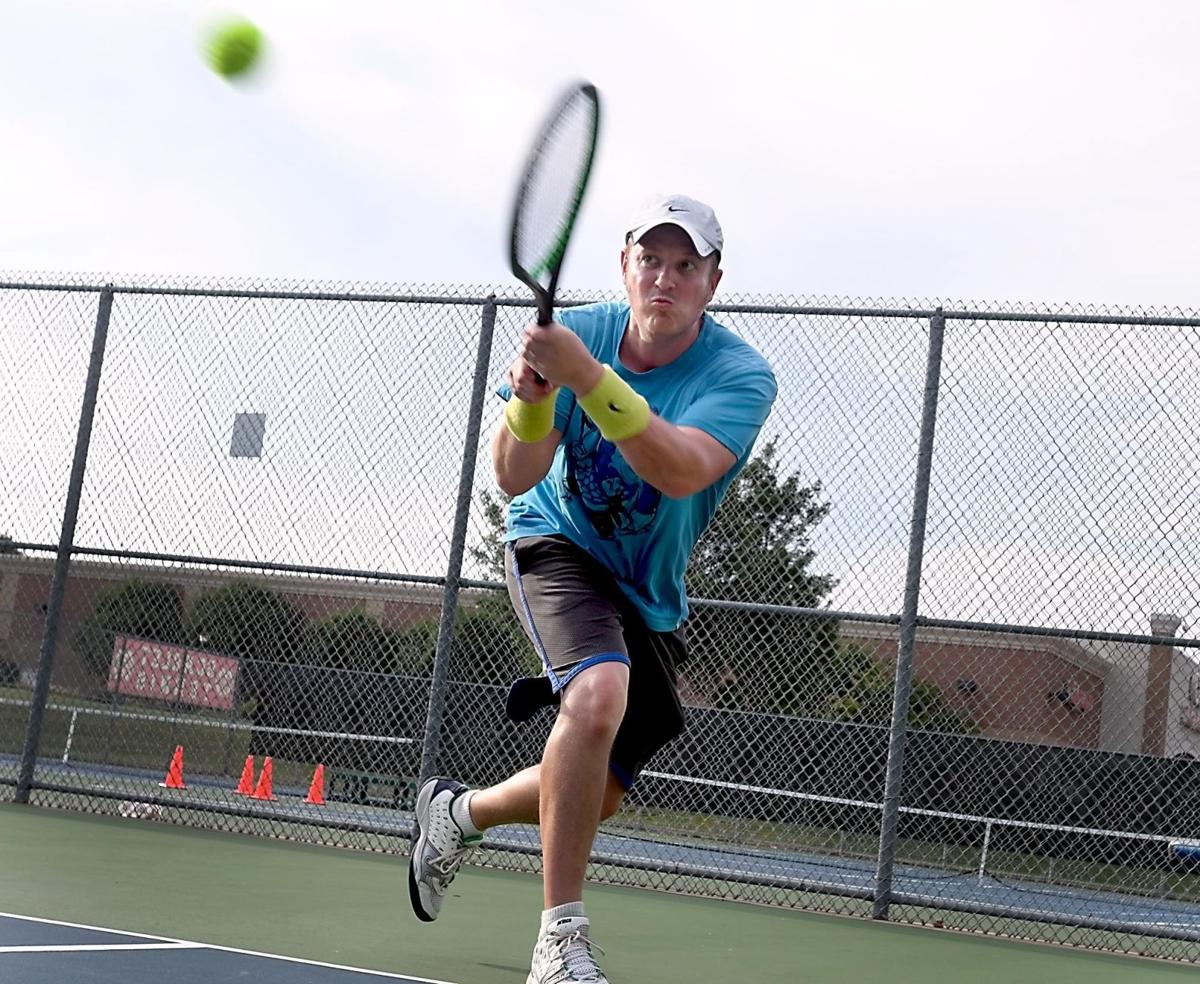 Derek Brown returns a shot during a flex league game at the Mankato West High School courts on Monday evening. Brown is the president of the Greater Mankato Community Tennis Association. Photo by Pat Christman 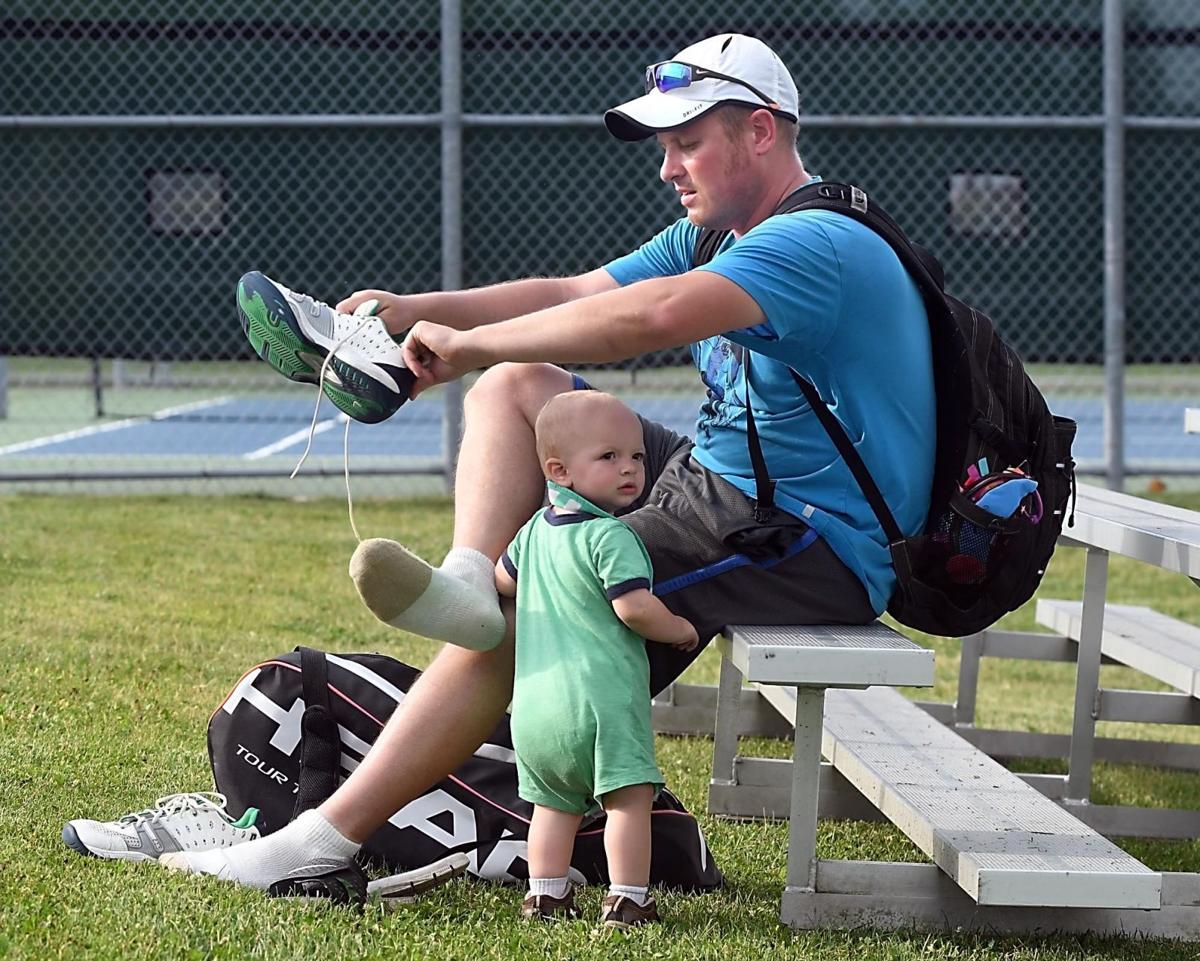 Derek Brown changes shoes while his young son stands near him, prior to a flex league tennis match on Monday at the Mankato West High School courts. Photo by Pat Christman

Derek Brown returns a shot during a flex league game at the Mankato West High School courts on Monday evening. Brown is the president of the Greater Mankato Community Tennis Association. Photo by Pat Christman

Derek Brown changes shoes while his young son stands near him, prior to a flex league tennis match on Monday at the Mankato West High School courts. Photo by Pat Christman

Derek Brown moved to Mankato from Minneapolis three years ago. A Texas native, Brown dabbled in tennis a bit while living in the Twin Cities, but he hadn't played the game in an organized fashion since he was in fifth or sixth grade.

"I really missed tennis," Brown, now 34, said. "I used to play with my dad as a kid, and I've always loved watching it. I wanted to find a casual league."

Matt Bulger was a Division III college tennis player at Wisconsin-La Crosse. After graduating in 2015, he moved to Mankato and immediately started looking for opportunities to continue playing his favorite sport..

"I just finished school, and the first thing I did was contact Adam (Doll, Mankato West High School's coach), and I did some Googling," said Bulger, a native of Michigan.

Both Brown and Bulger were welcomed to their new homes by an active and open tennis community, one that includes a wide range of abilities.

It was also an organized community with the thriving Greater Mankato Community Tennis Association. It didn't take long for either of them to get involved, and not just as players.

Brown currently serves as president of the GMCTA, and Bulger is the association's director of planning and programs. Bulger is also the tournament director for the Riverbend Tennis Classic, which will take place Friday-Sunday on courts around the city.

The Riverbend Tennis Classic is the association's signature event, featuring several levels of play. There are open divisions with cash prizes, as well as 4.0, masters and junior divisions.

As of Monday, about 54 players are signed up for the tournament, Bulger said, but he anticipated a lot of last-minute interest, as last summer's tournament drew 82 participants. He's hoping to wrap up registration today.

"Our goal is to bring people from out of town to Mankato to show what we have to offer for tennis," said Bulger, who was assisting Doll with a session of cardio tennis on Monday evening at the West courts. "We offer some good competition here. There are a lot of very talented people. I like to tell people that Mankato is a hidden gem of good tennis players."

Brown, who had just wrapped up a flex-league match on a nearby courts, agreed.

"That's what's so great about tennis," he said. "It stretches out overall age groups, from casual players to serious players. You don't have to be a professional."

Said Doll: "Our sport is very inclusive. We try to include so many people in so many ways. It really is a lifetime sport."

Besides hosting the Riverbend Classic, the GMCTA's mission is to grow and promote the game in Mankato and bring the area tennis community together in various ways, including organizing the flex league, which currently has about 40 members but had as many as 55 last summer.

The association also promotes cardio classes, provides grants so youth can play summer tennis, purchases benches for the city's many courts and puts on mixers for current members and block parties for the entire community.

"It's all possible because of our volunteers and people willing to serve on our board," Doll said.

The association's ultimate goal is to get an indoor tennis facility in Mankato and make it a year-long sport. Tennis enthusiasts who want to play in the winter months must go out of town, such as to Owatonna or to St. Peter where Gustavus Adolphus College has the Swanson Tennis Center.

GMCTA members are hoping that the Mankato Sports Commission's and city's examination of future sports facilities can include such a venue.

"We just want to be more competitive," Brown said.

For now, the competition will take place on the outdoor courts, including this weekend's tournament on the West and East high school courts.